Dale of Norway sweater for men and women in Canada

For more than a century, Dale of Norway has established itself as the world reference among the manufacturers of elegant and functional wool sweaters.

Several national teams from different winter sports proudly wear the original creations, which allow Dale of Norway to enjoy an exceptional international showcase. Indeed, this brand is recognized and noticed all over the world today.

The origin of the Norwegian sweater

To talk about the origin of the Norwegian sweater, we must go back to the 19th century. Travellers saw on Norwegians a coarse wool sweater of which only the upper part was decorated with motifs because the bottom part was hidden when inserted into their pants.

Discover the authentic Norwegian sweater of Dale of Norway

Free shipping for
Dale of Norway sweaters
in Canada

The word "chandail" in French refers to a sweater. This term comes from the term "garlic merchant" that Parisians used to designate merchants who often came from Brittany. In Brittany, the marine sweater made entirely of waterproof wool, such as the Saint James sweaters, was already, at that time, a piece of clothing considered functional and indispensable for these men from the western coastal region of France. Slowly, the term "garlic merchant" got transformed to refer to this sweater internationally and much more recognized and accepted than at the end of the 19th century.

Although it is knitted according to traditional know-how entirely in circles, the Norwegian sweater is very similar to the Fair Isle sweater (Scotland) or the Lopapeysa (Iceland). Some will say that the quality of the wool gave an advantage to the Norwegian sweater of the past. Today, the criterion that differentiates these types of sweaters is the traditional geometric patterns used. A purely aesthetic aspect, but it still respects the traditions of this garment. 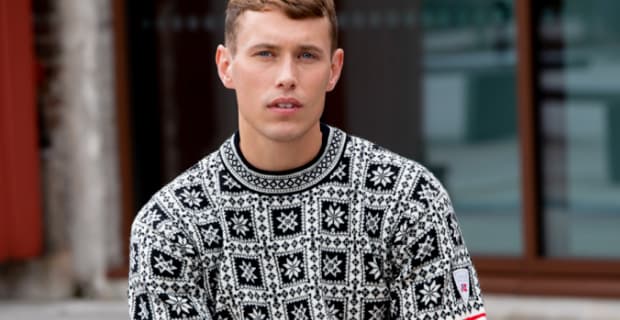 You may have already heard of more well-known pattern template names like the Setesdal, the Slalam, the Marius, the Cortina, the Tiril, the Tiril Snøkristall, the Fana or the Selbu. These are all distinct styles of typically Norwegian patterns. Dale of Norway makes sure to use one or the other of these motifs according to the need for original design: sometimes a historical motif for more elegant sweaters or a pattern resembling nature (floral motifs) for sporty-looking sweaters.

As indicated above, some seamstresses did not bother decorating the lower part of the Norwegian vest of yesteryear because it was, in any case, hidden by the trousers. As a way to embellish the solid colour, the "lusemønster" was sometimes used to add small motifs in the shape of "V" through the original knitting, all distributed as symmetrically as possible. These small patterns called "lice" are at the very origin of the name of a traditional and very emblematic model of Norwegian sweaters: the Lusekofte. This name can be translated literally as lice sweater. 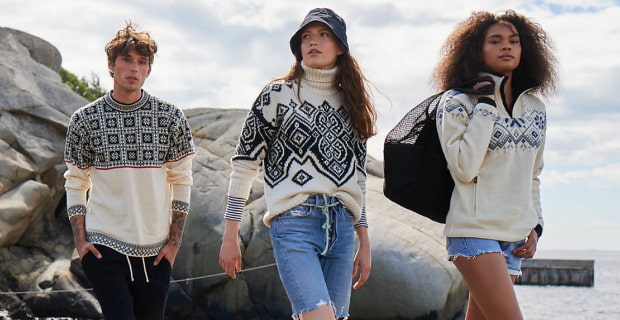 Some will say that it was Annichen Sibbern Bøhn, collector and knitting designer, who helped make the Norwegian sweater (the Setesdal sweater in particular) more accessible to women after listing and helping to popularize all the different models of knitwear known until 1933. Where does the popularity of Norwegian knitting come from?

These functional garments of an aesthetic based on the folkloric motifs were subsequently popularized, in particular by the distinguished skiers of the country during many Winter Olympic Games. Even today, several countries other than Norway borrow these Norwegian-style garments as the official garments of Olympic teams in various winter sports. 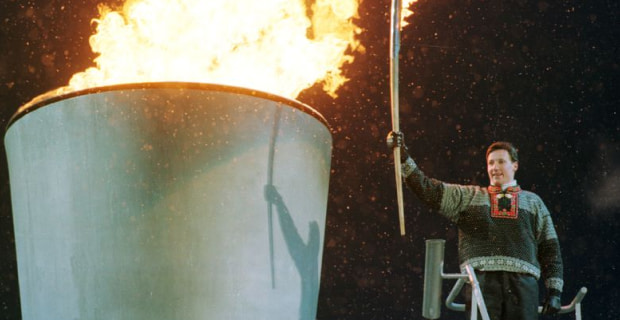 Prince Haakon of Norway in 1994 wearing the Setesdal-style Norwegian sweater at the 1994 Winter Olympics in Lillehammer, Norway.

The Norwegian sweater is closely linked to winter sports

The modern look of the current clothing combined with the functional criteria of their wool clothing allows Dale of Norway to be the originator of many official team clothes from different winter sports from all over the world. 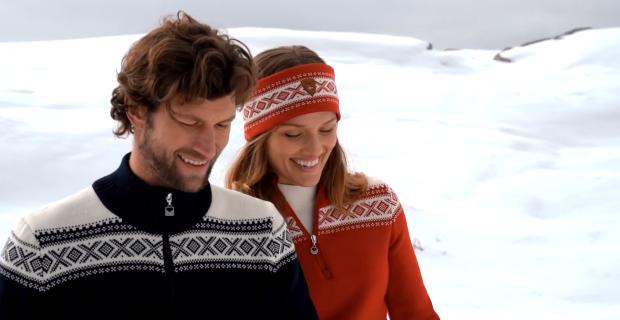 In Canada, Dale of Norway can boast of having been selected as the official jersey of the Canadian ski cross team in 2016-17. Dale of Norway's know-how was recognized by these high-level athletes. Maybe at the next Winter Olympics, we will still be able to see proud Canadians dressed in Dale of Norway wool sweaters.

Discover the authentic Norwegian sweater of Dale of Norway

Free shipping for
Dale of Norway sweaters
in Canada