Since its appearance at the beginning of the 20th century, the now legendary stripes of the Breton shirt have won their letters of nobility. Many try to imitate it, but no one can match the quality of Saint James Breton striped shirts stemming from unique ancestral craftsmanship dating back to the 18th century.

For a single Saint James Breton striped shirt, 4.4 km of cotton yarn; made from 104 cotton flowers are needed. Making its clothes with the help of many seamstresses working at the original workshop in France, Saint James is proud to be one of the oldest French fashion brands still in business today.

The origin of the Breton striped shirt

Although today it is a garment that can exude a lot of elegance, the Breton striped shirt still has a summery connotation often associated with holidays, the beach and the seaside. With good reason!

In the beginning, this striped cotton garment was closely associated with the sea and the ocean. The shirt with a striped knit, sometimes called by its English names Breton shirt or striped shirt, only served as an undergarment for sailors in western France.

Why do we say that the striped sweater is Breton?

The Bretons, renowned for being very comfortable on the ocean, formed a large part of the French Navy under Napoleon III. As early as 1858, these sailors saw the striped knitted shirt as their official uniform. Still today, we can perceive the Breton influence from the name of the striped sweater in the English language: "Breton shirt".

Why is the Breton striped shirt striped?

The arrival of the modern Breton striped shirt

In the aftermath of World War I, none other than Coco Chanel personally sported this striped cotton shirt usually paired with pants. An outfit that derogates from the constraints imposed on women at the start of the previous century.

Since then, big names in haute couture have included striped shirts in their clothing collections, such as Yves Saint Laurent, Jean Paul Gaultier or, more recently, Karl Lagerfeld, just to name a few. Today, a simple alternation of white and blue stripes, particularly an indigo blue, reminds us of the French striped shirt and all that it represents.

The Breton striped shirt for women

Inspired by the clothing of local crewmembers in Deauville, France, from the start of the 20th century the striped shirt became an accessory that allowed Chanel to propel, in her own way, the emancipation of French women. The Breton striped shirt, traditionally reserved for men, will gradually become an essential part of the wardrobe of these ladies.

The Saint James striped shirt for women is now known to be much more feminine than in the past. The quality of manufacture is of course always there, but the cuts as well as fine details specific to Saint James Breton stripes shirt for women updated this boyish looking piece of clothing of the Roaring Twenties (1919-1929).

Several colors are now available for the Saint James Breton striped shirt for women to boldly seduce all those tempted by an elegance signed Saint James. The Breton striped shirt for men

The symbol that the Breton striped shirt represents, for both men and women, has withstand the test of time and remains today a perfect blend of elegance and character. The Saint James striped shirt for men is no exception.

Originally cut straighter than the ladies' striped shirt, this men's classic was also revisited by Saint James over the years. The original colors, white and indigo, are still featured in most of the men's striped shirt models offered by Saint James. However, other colors are now available while respecting the classic look of the sailor top of yesteryear. In 1889, in Saint-James, the label that would later become the Saint James clothing brand that we know today, specialized particularly in clothing for sailors in order to meet the high demand caused by the obligation of wearing the striped knitwear for sailors and quartermasters of the French army of Napoleon III.

For a long time, the exceptional quality clothing of the Saint James brand was not offered to the general public. It was only with acceptance of the Breton striped shirt as an everyday garment, that it became available to individuals.

To be a little more daring, the Saint James striped shirt has been put forward due to the demand of this new clientele in a recent collection for Avnier. This much younger French-Swiss clothing brand for men and women was created by Sébastian Strappazzon and Orelsan, a Norman rapper who no longer needs presentation in French-speaking Europe. 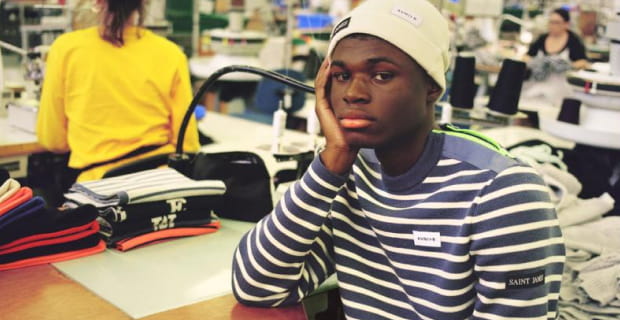 The heritage of the French marinière

The paradigm shift of the striped shirt during the 20th century, sometimes a sailor's garment and sometimes a distinguished garment of a superior quality, made it so that it is not surprising to see Saint James garments last for several generations.

Indeed, in France, Canada and elsewhere in the world, we sometimes see Breton shirt, cardigans and, above all, sweaters being passed down from father to son because of the timeless character conveyed by the style and the quality of knitting that still makes the glory of the famous sailor sweaters of yesteryear shine.

“A high-quality sweater that is waterproof. That's why they say a Saint James sweater is for life!’’ - Benjamin Auzimour, General Manager of the Saint James brand in North America (2018).